V. The Single Sistr. A. Mary Anton. The following are her own Words: I am born the 18th of May 1739 at Pilgerruh in Holstein. but so they Congregation emigrated, I came as a little Child to [?] to Hhuth. But Anno 1744, my Parents took me along to Berlin, which was a great Loss to me, then I heard & saw there many Things good for nothing for me & had had not our Savr. preserved me, I had natural Instincts & Occasion enough to commit many wicked Things. A.o 1747. I moved wth my Parents from thence to Bertholdsdorf, because the gat yet no Leave to come to Hhuth. Anno 48 we removed to Hhuth & after a short Stay there, to Hhaag. Here I came soon to my great Joy in the Anstalt of the Children. In the Begin I was very happy, but my lightminded Temper made the feeling of our Saviour soon vanishing. Anno 49. the 25th of March I was received into the Girls Choir but soon observed in the first Conversation that this meant some Thing more then they were upright & Sincere & that I could not do. In this year I came with my Parents to Ebersdorf & served the, but resided very often in my Choir-House. I was here not long I begun to grow indifferent & came by means of a wicked Compagnie in poor Circumstances & became excomunicated for a time from by the Congregation till our Saviour bestowed Mercy on me that I could disclose all my hidden Tricks.

Anno 53 in April I was received into the Congregation.

I was ashamed about this Grace, but by all that I came not farther then my Heart was not open & secure before God & Man. I soon came in my former Snares again & begun to doubt if it would come with me to any Thing at all. However Anno 54 the 24th of Feb. as I toock a walk in the Field I accidently fell in a intime Conversation wth our Savr. & could discover my whole Heart towards him & so begged Mercy under many Tears & that he would let me from This Day experience how good it is wth a happy Heart to be in the Congregation. By this inter_ cource he was as near to me the as if he was visible.

Anno 1755 the Month of Jan. I came in my Choir-House as wherefore I loockd out a good while. The first time I was happy again, but as I disliked to appear as such a wicked & naughty Siner, then it didn’t went as well as it could; but the Truest Friend of my Soul whose Patiens persecuted me from my youth, did not draw back his Hand, wicked as I was. They holy Ghost licke a true Mother begun his Work anew & showed to me de deplorable Condition of my wicked Heart & brought me in the most extreme Distress about myself. I conversed with my Laboures & revealed my whole Heart towards her & our Savr. as the great Friend of Sinners appeared to me again at in his unspeacable Nearness.

Anno 57. 21st of March I became Canditat to the holy Communion, & had so happy a Time which I shall never

forgot. I lernt now myself better to know, became a more intime Connection with our Saviour & he became many Sinner – Fears before his pierced feet. the 14th May I was confirmed & the 11th June the blessd day appeared where I was to partake on his holy Body & Blood here I lost myself & could nothing but weep. the 20th of July I receivd the blessing into the Single Sisters Choir & I gave him Heart & Hands to become his true Soul. Soon after I & four Sisters more went from here towards Herrnhuth & arrived the 8th of August, where I had the Pleasure to live into the Choir-House. Here I enjoyd his happy Nearness as a poor Sinner, but weep daily for Want & Insufficiency. His Grace & Mercy is my only Holdfast, without, I easily could be come inshared again. My only Desire is to live as his Property to the Joy of his Heart, & that his holy Corpse & Blood may irradicate all what’s unJesuslicke in my Soul & Body. So far She herself.

However [illegible] unsettled her State of Mind, She was for all that Sincere & openhearted. Anno 1760. Our blessed Disciple spoke her & from this Time our Saviour settled her Mind & brought her to a sure foundation. She has been for a Time excommunicated from the holy Sacrament & in this Interval the holy Ghost had his blessed Work in her & she became solid & He certain. Her Happiess became more consistent & She learned to know by all her Insufficiency & Sinfulness to keep close to our Saviour & on his meritorious Atonement. Hereby She found herself glad, servitable & in Conversation lovely.

It was a Pleasure to her to serve one of her Sisters & her daily Work in Washing She did wth all possible Care & diligence. In the last Days of April She was taken sick on a sudden but resisted as much as possible, because of her Choir Feast drawing so near. But a vehement Fever forced her that She willingly the 1st of May entered the Sixth Room. On her Feastday was She very happy in her Room & was glad to celebrate her approaching Birthday by this op- portunitity in this so Hill & happy Place. The Watch Word of her Birthday was: Er riss mich heraus denn er halte Sust zu mir. Was muss Jesus an mir trüben Herzen lieben? This was extraordinary pleasing & comfortable to her.

Privately She hoped if our Saviour by means of her Sickness would’t take her in his eternal Safety, but this She believed was to great a Luck for her. By all her Smart She was always Silent, of good Cheer & very lovely & thankful to her Waiter. The 8th as She expected her Portion by the holy Sacrament, She said : A! When this would be be the last & when I to Day were so

happy to expire on his Breast. How well, how happy would this be for poor me! But effscarily She had receivd the holt Sacrament, then her to hole Countenance begun to change & lay without Motion, but inwardly present to herself; She took no Notice of any Thing; the formerly so very acceptable Visits of her Sisters, became now very indifferent to her. Her Heart continually conversd wth her only Friend: She made some Motions wth her Lips but nothing could be understood, & between 10 & 11 a Clock in the Evening her Soul departed to her eternal Home, after a Sojourning in this World of 24 Years, wanting one Day. 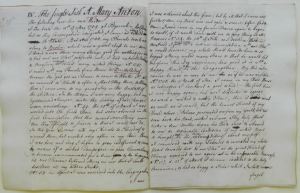 Learn more about the world of Mary Anton

People mentioned in this memoir

Places mentioned in this memoir

New memoirs from Fulneck, UK added to Transcription Desk! We have been busy over the winter break, …